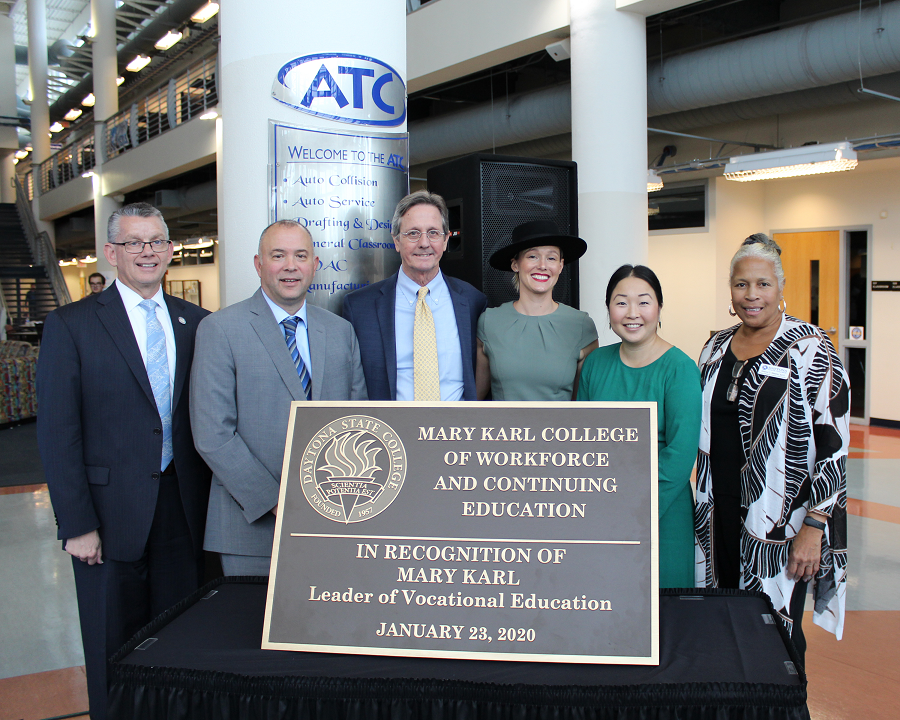 “It’s no stretch to say that Daytona State would not even exist, if it were not for the efforts of Mary Karl, whose passion for education in Volusia County changed the lives of so many young men and women,” said Dr. Tom LoBasso, DSC President. “It’s amazing that what she started in the ‘30s and ‘40s, vocational training in plumbing, welding, carpentry, electric, and automobile engine repair, are skilled trades that we’re still teaching today at Daytona State.”

Karl was one of Volusia County’s early leaders in education, compiling a long list of accomplishments during her career, first as a teacher at Mainland High School before she was named Director of the Opportunity School in 1931. Her crusade to broaden, strengthen, and enhance the opportunities available to students, along with her tenacious determination, became the driving force behind what evolved into the Volusia County Vocational School. After initially providing training in vital workforce programs during the Great Depression and World War II, the school later retrained veterans for work in civilian jobs.

With the aid of friends and colleagues such as U.S. Senator Claude Pepper, Mary McLeod Bethune, the founder of Bethune-Cookman University, and First Lady Eleanor Roosevelt, Karl was able to secure property from the federal government for the expansion of her school and its further development as a junior college. Her vision became a reality in 1957 when the Florida State Legislature authorized the creation of Daytona Beach Junior College from the pre-existing vocational school. The College has since gone through two name changes, but the property acquired by Karl is still the present-day site of DSC’s Daytona Beach Campus.

“This means a lot to us a family, to have her name remembered,” said Rick Karl, grandson of Mary Karl and Director of Aviation and Economic Resources for Volusia County. “Mary and her husband lost everything in the Depression, so she was not a person of wealth, but her passion is what carried this on. I think of my grandmother and Mary McLeod Bethune taking the train together to the White House to meet with Eleanor Roosevelt, who picked up the phone and called the Pentagon to get this rolling. This is a story of three women collaborating in the 1940s and how a single person, not of wealth, but with tenacity, set out to make this happen.”