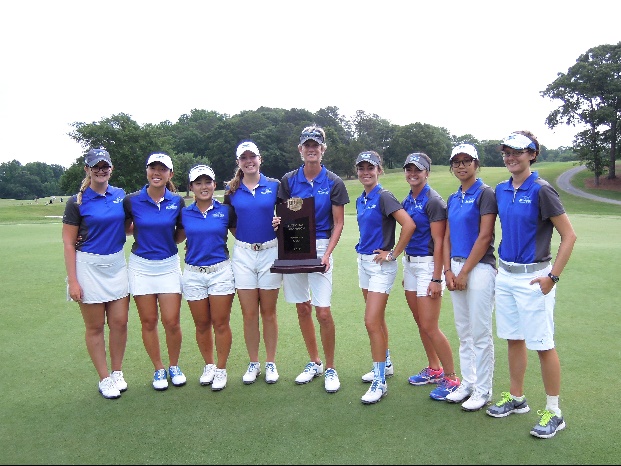 BRASELTON, Ga. (May 19, 2017) – After four days of competition at the Chateau de Elan Resort in Braselton, Georgia, Daytona State College claimed its ninth title in 13 seasons at the NJCAA Women’s Golf National Championships. Under the direction of Head Coach Laura Brown, the Falcons scored 1191 over four rounds to finish 55 over par, besting their closest competition by 14 strokes.

“This is a tremendous win for Coach Brown and her team,” said DSC President Thomas LoBasso. “Our women’s golf program has become a dominant force in the NJCAA on and off the course. We’re very proud to add another national championship to the program’s credentials as well as another year of success in the classroom.”

Freshmen Grace St-Germain (Ontario, Canada) and Jiwon Jeon (South Korea) led the Falcons, posting the team’s lowest scores at 295 (+11) each to finish in a tie for third place overall. St-Germain recorded the lowest round of the entire tournament on Wednesday, posting four birdies to finish at 68 (-3). Freshman Kendall Johnson (Plant City, Florida) and sophomore Kaye Kwon (South Korea) also finished in the top ten. Both Falcons shot 75 in the final round, leaving Johnson tied for sixth at 299 (+15) and Kwon tied for eighth at 302 (+18). Sophomore Katie Veale (Orlando, Florida) rounded out the Falcons’ five-person competition team in a tie for 32nd place with a 329 (+45).

Outside of the team challenge, sophomore Cam Becker (Orlando, Fla.) excelled as an individual in the competition,

“The thing that really impressed me this week and throughout the year was the top four were so consistent,” said Brown. “Even if they had a bad round they posted a decent number that kept us a little better than the other team. It was a grueling four days, the course was tough, it was hot and the pace was slow, but they stayed really focused and got the job done. We are excited to be national champions.”

Much of the team’s success can be attributed to Coach Brown, a former LPGA tour card holder and New Smyrna Beach native. Over her 19 seasons at Daytona State, Brown has coached 72 All-Americans, six NJCAA Individual National Champions and one future Olympian.

“Coach Brown is a great leader, as she’s proven yet again this year by coaching such great performances from her team,” said Will Dunne, Daytona State’s athletics director. “All of our Lady Falcons put in a great effort. We’re looking forward to our returning sophomores coming back this fall so we can continue the high level of competition this program is known for.”

In addition to their successes on the course, the Falcon women’s golf team also excels in the classroom. Over the last 10 years, Daytona State has earned six FCSAA Female Academic Team of the Year awards and four NJCAA National Academic Team of the Year awards. Although grades are still out for the spring semester, the Falcons are on track for a repeat of both academic titles this year after putting up a 3.94 team GPA in the fall of 2016, which was their best to date.

Daytona State Falcon athletics carries a winning tradition in both competition and academics. Falcon teams consistently earn state and national recognition for their academic achievement. Over 90 percent of DSC student-athlete graduates transfer to a university with full or partial athletic scholarships.