Daytona Beach, Fla. (April 10, 2017) – Daytona State College's new soccer stadium is generating exciting opportunities for Volusia County even before the turf is laid. At their annual 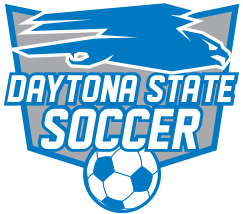 "This is exactly the type of national event we were hoping to bring to the community when we began planning our new soccer stadium," said Dr. Thomas LoBasso, president of Daytona State. "The impact of an event like this will go far beyond our campus and ultimately benefit local retailers, restaurants and hotels. It's a fantastic opportunity for tourism in Daytona Beach and a special moment for our institution to step into the spotlight and shine. DSC is a top choice for higher education in our community, and our elite athletic programs enhance the student experience."

The 15-game tournament will bring participants, their families and fans to town Nov. 12-17, 2018, for a week of play leading up to the championship game. In previous years, the tournament generated hundreds of thousands of dollars in host city revenue from participants, including hotel occupancies between 700 and 900 rooms. Beyond participant-driven income, double the economic impact is expected from players' families and team fans who come to town for the event.

"The NJCAA national soccer tournament will be a perfect fit for Daytona Beach and Daytona State College's new state-of-the-art facility," said Lori Campbell Baker, executive director of the Daytona Beach Area Convention & Visitors Bureau. "The destination is seeing more and more activities on the sports front, with both event coordinators and teams finding the area to be a perfect place for high-profile competition, with quality facilities, warm hospitality, and plenty to see and do once the games conclude. We're looking forward to working with Daytona State College and our area partners to make this championship a true success for the players and the organization – on and off the field."

"We can't wait to open the gates to the public for the first time this fall," said Will Dunne, Daytona State's athletics director. "This new facility is going to take our program to the next level, giving us the ability to host more national tournaments like this, as well as important community events like youth soccer clinics and club matches. Fans are going to love watching live sports on this field."

The host team hopes to add to the program's 11 NJCAA Team National Championships with its first title in soccer. In 2016, the inaugural year for both men's and women's soccer at DSC, the men's team was one of 12 squads who qualified for the national tournament. They advanced to the second round and finished the year with an impressive 17-4-1 record.

The women's team also shone with an 11-3 record, and was ranked among the NJCAA's top 20 teams, while coach Brittany Jones was named Region 8 Coach of the Year. DSC hopes to utilize its newest venue to host the women's national tournament in the near future as well as regional high school and club competitions.

Daytona State Falcon athletics carries a winning tradition in both competition and academics. Falcon teams consistently earn state and national recognition for their academic achievement. Over 90 percent of DSC student-athlete graduates transfer to a university with full or partial athletic scholarships.

For more information on the NJCAA Men's Division I Soccer Championship visit DSCFalcons.com.