Gives total cost savings of nearly 3.5% to all students this fall 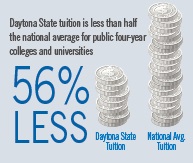 easy on the wallet.

Beginning with fall enrollment, all DSC students will see a total cost savings of nearly 3.5 percent.

The savings are a result of a reduction in the access fee from $4.93 per credit hour to $1.35 per credit hour. Added to a 2 percent cut in tuition implemented last spring, overall cost savings per student comes to 3.3 percent.

During its June 16 meeting, the college's District Board of Trustees unanimously moved to reduce the fee and continue the reduced tuition from spring.

"This fee reduction is part of our ongoing effort to ensure that Daytona State remains affordable and accessible to all who seek to improve their lives through a college education," said President Tom LoBasso. "We are able to do this in part because of better efficiencies and increased retention rates. Most recently, our move up to silver level in the state's performance funding plan allows us to pass savings on to students."


The access fee is authorized by Florida Statutes to cover the costs of certain services  colleges provide to students. Daytona State historically has included in its access fee costs  related to campus safety for parking lot areas, student IDs, student portal costs and a  portion of costs for academic support services.

"For 2016-17, the college has decided to primarily remove the academic support costs from the access fee and will now absorb these costs from our general operating funds," LoBasso said. "The access fee reduction equates to approximately $1 million less being charged to students based on 2016-17 estimated credit hours."

The fee reduction came as the board approved an annual operating budget of $86,938,559 for the coming fiscal year, which begins July 1.


Shortly after LoBasso last summer was named DSC's president, Daytona State was among the first in the nation to implement its 2 percent  tuition reduction. That move came on the heels of what already had been a five-year tuition freeze.

The ongoing effort to control costs has earned Daytona State a ranking among the top 60 most affordable in the nation by the U.S.  Department of Education's College Affordability and Transparency Center, which notes that the college's tuition rate is less than half the  national average for public four-year colleges and universities.