Falcons take Southeast District, on their way to NJCAA Tournament 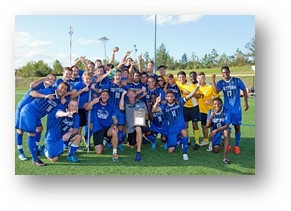 the Eastern Florida State College Titans, 2 to 2, winning 10 to 9 in overtime shoot out.

The Falcons entered the play-offs as the Region 8 Champions, ranked 8th in the National Junior College Athletic Association (NJCAA), and are now the Southeast District Champions. With this victory they will play the NJCAA Division 1 national tournament held in Tyler, Texas. The Falcons are awaiting their group and seed placement for the tournament, to be held at Tyler Junior College at Pat Hartley Soccer Complex Nov. 14-19. The Falcons' season record is 16-2-1.

"I could not be more proud of a group of student athletes and their coaches," said DSC President Tom LoBasso. "These teammates unified their play incredibly well in their very first year. A victorious hard-fought season like this shows how well our Falcons rise to athletic challenge, while also maintaining academic prowess."

This match was unlike any other the inaugural DSC men's soccer team played this year, lasting 120 minutes plus penalty kicks, and ending with triumphant Falcons raising the trophy high. This was the fourth time this season that the two teams met but the level of competitive play during the match was unparalleled.

"You can't coach what happened here," said Head Coach Bart Sasnett. "The win came from real heart, and these boys gave it everything they had."

The first half was nothing short of spectacular play from both teams. The Falcons and the Titans came out firing on all cylinders wanting the win. Daytona got on the board first with a header from sophomore and captain Brandon Berg. The Titans answered right back with a goal from Alex Alexis to tie it up 1-1. The game went into halftime with the score tied.

As the 2nd half began, Daytona came out with the momentum and started taking as many shots as they could. Instead of Daytona getting a goal, Eastern's Danilo Orsi-Dadomo got one chance and put it away, making the score now 1-2. With time running out and the game nearing an end in the 80th minute, freshman Donovan Segree rocketed a shot into the side of the net tying up the match for Daytona.

All Coach Sasnett could do now was send 10 players to take penalties, everything else was out of his control. Coach Sasnett trusted assistant coach Travis Rovillo to come up with the PK shooters. Sasnett made the decision of going with sophomore local Jesse Della Porta to be the keeper in the penalty shootout. "Jesse is known as a keeper who can save penalties in big games," said captain Brandon Berg. Sophomore goalkeeper Palemon Plancarte played the entire match for the Falcons, including both overtime periods. "He is an incredible keeper and he played an extraordinary match," said Sasnett. "His performance was unmatched and he kept us in the game on many occasions." Plancarte recorded 17 saves in the match, only allowing 2 goals.

The rules for penalty kicks give each team five alternating kicks. If one team is not ahead on goals after these five kicks, the shootout proceeds to sudden death, and that is exactly what happened.

The first PK usually sets the tone for the remainder of the shootout, and this time was no different. The Titans were awarded the first PK and their captain Craig McCall was up to take it. With pressure and anxiety building, McCall shot the ball and Della Porta dove and saved it. That was all the Falcons needed to persevere through the shootout.

The Falcons, with a high level of team focus, continued to stay fixated on the task at hand, which led them to put so many balls in the back of the net. Since the first 5 penalty kicks ended on a tie, the remaining 5 shooters were now in sudden death penalty kicks. When it came to Eastern's 9th shooter, Della Porta psyched him out and the shot ended up over the goal.

All the Falcons had to do now was make a shot and they would win. Freshman Jahnazae Swan, calm and collected, walked down the field to the penalty spot. As he approached the spot, he looked over at the bench with confidence. With the pressure of the game on his shoulders, he shot the ball and placed it right into the back of the net. The Falcons rushed the field in excitement.

"This experience was phenomenal," says Sasnett. "I'm proud beyond words of this group of guys, and they deserve this."

DSC athletes also consistently win in the classroom, with last year's golf and baseball teams winning 2016 NJCAA first place as National Academic Teams of the Year. Over 90 percent of DSC athlete graduates transfer to a university with full or partial athletic scholarships.