DAYTONA BEACH, Fla. (Oct. 28, 2015) – For the first time in the 40-year history of Daytona State College's literary magazine, the publication took first in General Excellence during the 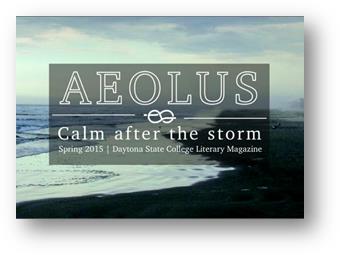 Aeolus placed first in Division A of the contest and In Motion, the student newspaper, placed second in General Excellence in the combined A and B divisions. The Reporter, which represents all five campuses at Miami Dade College, took first place for the second year in the newspaper category.

The FCSPA, a division of the Florida College System Activities Association, uses professionals from the fields of journalism, literature and poetry to judge the entries. Ana Veciana-Suarez, a nationally syndicated columnist and longtime Miami Herald reporter, coordinated the contest.

"We were completely shocked to win such a huge honor," said magazine adviser Elena Jarvis, who co-advises In Motion with Bruce Cook, assistant dean of Co-Curricular Activities. "Considering there were 15 magazines overall in the competition and seven newspapers competing, all of which are excellent, it must have been a tough call for the judges. But our students, who work long and hard to ensure the quality of their publications, deserve the recognition."

Before being re-christened Aeolus five years ago, the magazine was named Ole, before that Paeonie's Pen and before that, in the 1970s, Sporran.

Elizabeth Kirkland, editor in chief of In Motion and Aeolus editor for 2015, took on double duties this year to ensure both victories. In addition, DSC's Brandyn Krampert won the coveted Debra Allen Vazquez Memorial Poetry Award for 2015 for his poem, "Strangers in a House." Vazquez taught poetry and creative writing at the College of Central Florida in Ocala before her life was cut short in a domestic violence murder in 2004. Since then, the award has honored her memory and dedication to excellence in the written word.

Daytona State students also won Inner Circle Awards recognizing the most wins overall in each category. For newspapers, Krampert and Kirkland were named to the inner circle and in the magazine division, Kirkland took top honors.