DAYTONA BEACH, Fla. (May 8, 2014) - Dr. Douglas Peterson, chair of the Mike Curb College of Music, Entertainment and Art at Daytona State College, has been invited to conduct a concert at the Auditorio Nacional de Música - the major concert hall in Madrid, Spain - on Saturday, May 24. 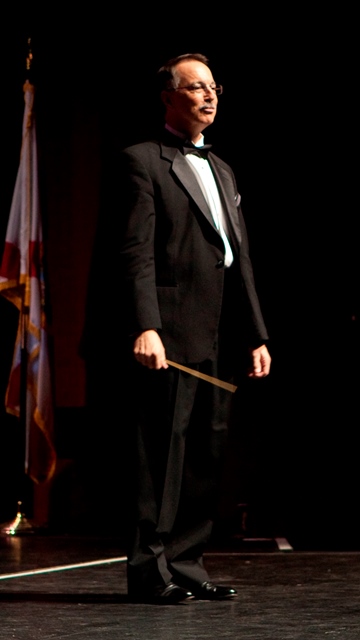 Peterson will lead a 100-piece symphonic band as part of a conducting exchange with Maximillian Santos, a Madrilenian conductor who on July 3 will share in conducting the 75-member Daytona State College Band during its Independence Day concert.

“I will be hosting and working with Maxi in presenting an all-American concert with a Spanish conductor,” Peterson said. “It was, after all, 501 years ago that the Spanish first came to Florida.”

The arrangement stems from a relationship coordinated by Gregory Fritze, a faculty member with the Berklee College of Music in Boston. Fritze, also a professional tubist, has played with the Daytona State band while living part of the year in the Wilbur by the Sea area.

During the May 24 concert in Madrid, Peterson will conduct selections from Indiana Jones, Silverado and a heroic work by movie soundtrack composer Rossano Galante called Resplendent Glory. The band will be joined by a 200-member children’s choir for several selections.

He also will travel to Valencia, to work with local community band organizations, learning new literature, rehearsal techniques and what makes their programs unique. He added he hopes to bring back to Daytona Beach some new and fresh ideas for kicking off the fall semester symphonic band.

“It’s going to be a real gas being in Spain, working together and sharing some great music with my Spanish colleagues,” he said.