The college and its District Board of Trustees welcome Stanley “Stan” Escudero and Garry Lubi of Daytona Beach and Palm Coast, respectively. The n 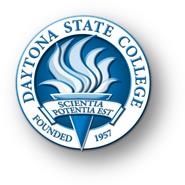 ew trustees are expected to attend the next board meeting on Thursday, March 27, at 2 p.m. on the Daytona Beach Campus.

“We’re delighted to welcome our newest trustees and look forward to working with them to continue advancing our region’s success through high quality education and workforce training,” said Carol W. Eaton, president of Daytona State.

According to the governor’s announcement, Escudero, 71, is a former ambassador for the United States Department of State and has served as president of the American Chamber of Commerce in Azerbaijan. A 1962 alumnus of Daytona State, Escudero served as Student Government president during his time at the college. He holds a bachelor’s degree from the University of Florida. He fills a vacant seat and is appointed for a term beginning Feb. 27 and ending May 31, 2015.

Lubi, 56, of Palm Coast, is the senior vice president of Ameris Bank. He has served as chair of the Flagler County Chamber of Commerce and on the board of the Flagler County Education Foundation. He has a bachelor’s degree from Canisius College. He fills a vacant seat and is appointed for a term beginning Feb. 27 and ending May 31, 2014.