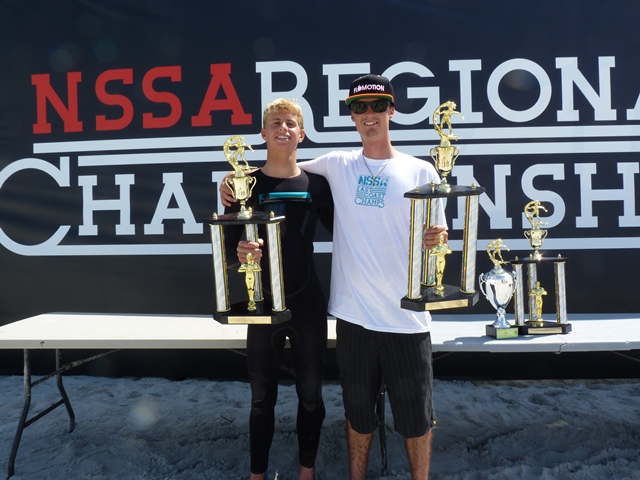 Bachelor of Education major Pat Gingras took third place in the longboard division final and freshman Dylan Martin placed fourth in the men’s shortboard final. Gingras and Martin, along with four other Daytona State surfers, competed against 10 other teams from major East Coast colleges and universities. They are the first Daytona State surfers to place in the NSSA East Coast finals since 2008.

“I am very proud of our surfers for their performance in the water, as well as in the classroom,” said the Surf Club’s coach, Bruce Cook, who also serves as the college’s assistant dean of co-curricular activities.

“This competition is something they do for the love of surfing, above and beyond their academic and other responsibilities.”

Daytona State’s team competed in seven NSSA regional contests during the fall and spring in order to qualify for the 21st annual NSSA East Coast Championships, which saw nearly 500 contestants vying for titles. The team finished the regular season in fifth place and tied for sixth with the University of Florida, Gainesville, in the East Coast Championship competition. The NSSA holds more than 80 surfing events annually. It is one of the few national youth sports organizations that requires its participants to maintain academic standards in order to compete.

In addition to representing the college in NSSA competitions, Daytona State’s Surf Club also actively involves students in environmental and coastal waters awareness activities in cooperation with other student clubs and organizations with similar interests. For details on how to join, contact Cook, (386) 506-4417 or cookb@DaytonaState.edu.