DAYTONA BEACH, Fla. (April 30, 2013) – Daytona State College will induct its inaugural class of the Alpha Delta Nu Honor Society of Associate Degree Nursing (ADN) during a May 6 ceremony that begins at 5 p.m. in the Hosseini Center (Bldg. 1200) on the Daytona Beach Campus. 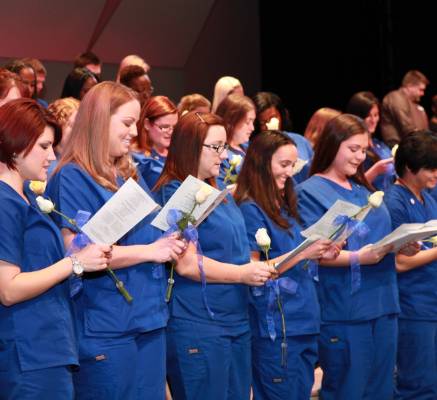 The 27 students who will be inducted also share the distinction of being the first in Florida to join the exclusive society, since the college’s Alpha Delta Nu chapter was the first in the state to be sanctioned by the National Organization for Associate Degree Nursing (NOADN).

“The opportunities this will bring to our students are so exciting, with community service projects and hands-on outreach,” said Carole Peterson, the nursing instructor who spearheaded the chapter’s creation and sanctioning. “When it comes to hiring, hospitals look at portfolios and experience.”

Membership in the society will be cited on ADN graduate transcripts, she added, noting the chapter is officially called the Alpha Mu chapter of the Alpha Delta Nu nursing honor society in Florida.

Alpha Delta Nu is open to ADN students who are in their third semester of the four-semester program. To be eligible, students must maintain a minimum 3.0 grade point average in all nursing courses, a B grade or higher in every class and complete a community service project. Peterson said, however, that students being inducted during the May 6 ceremony are actually fourth-semester students who will graduate just days later.

“We wanted to give everybody an opportunity to belong,” she said, adding that another induction for third-semester students will take place in October.

As their community service project, the May inductees held a health fair during spring semester where they screened more than 75 students and visitors to the Daytona Beach Campus. They took blood pressures, tested carbon monoxide levels and distributed educational handouts, such as information about smoking cessation.

In addition to recognizing the academic excellence of two-year nursing students, NOADN created the honor society to encourage the pursuit of advanced degrees in the profession, such as baccalaureate degrees in nursing. Daytona State plans to begin offering a Bachelor of Science in Nursing degree in January 2014.

Photo caption: Nurse candidates will be “pinned” in a ceremony on May 8. Graduates also attend college commencement on May 13.